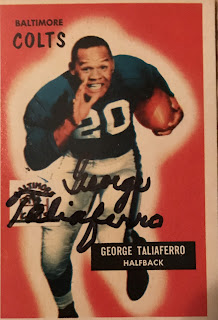 "All Sickness Ain't Death." (2017) Four words that came to me for the first time in nearly 28 years as I laid in the hospital bed wondering what was going on with my body. And while I felt so miserable, I began to get nervous as I laid there.  Was I going to get better?  But then all of of a sudden George and this phrase jumped in my head, and I reminded myself this was just a bump in the road. I was just ill for the moment.       "All Sickness Ain't Death." (1989) The four words my Intro to Social Work professor quietly wrote on the chalkboard while we took our first exam.  After he wrote them, he never really explained them. He left them there on the board for our own brains to ponder.      What those four words meant to him had to be profoundly different than what they meant to us...a bunch of freshmen just happy to be at college and free from home. He knew this, of course. We were clueless of the oppression, segregation, and racism that this m
5 comments
Read more 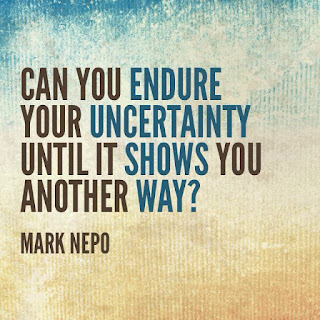 Can you endure your uncertainty until it shows you another way?       Uncertainty causes anxiety as it attempts to make you feel powerless. Uncertainty steals your ability to control situations in your life that you so desire to control. While struggling to hold on to some small piece of control, you desperately search for a new path, a new way to survive, even it is only temporary.  The horrifying uncertainty begins the second you hear those words..."You have Metastatic Breast Cancer."       I have been faced with the challenge of enduring uncertainty too many times over the past several years. Progression is found and the immense feelings of uncertainty hits again. You start a new treatment, and there is a small sense of relief...maybe this is the way. But then you don't know what the side effects will be like, or if your body will even be able to tolerate this new drug or multiple drugs. How long will this treatment work...maybe 6 months, 12 months, or maybe I
1 comment
Read more

Moving Forward...Always Dragging My Cancer Baggage Behind Me 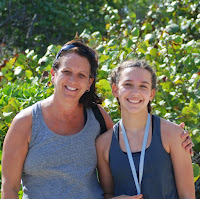 As we stood next to each other in church, she looked over at me and said, "Mom, your hair."  I leaned towards her and whispered, "What about it?" With a smile, she whispered back, "You look like you did before you got cancer."      That was over 4 1/2 years ago when she was only 8 years old.  I have lost my hair twice...once when diagnosed Stage 2 in 2012 and once when diagnosed Stage 4 in 2014. I fought tears as it broke my heart thinking about all that she has been through at such a young age. When you have Stage 4 cancer, the journey continues...whether you want it to or not...and you just keep dragging the cancer baggage behind you...trying to never let it get ahead of you. I was reminded in that moment that I am not only one in my family dragging the baggage.  My husband and five children are too.       And so my path changed again this week.  I was on a phase 1 clinical trial for a new HER2+ targeted treatment. Unfortunately, after two treatments
3 comments
Read more

Believe Me, It Takes Great Patience to be a Patient

March 06, 2017
It was only my second infusion, in early September of 2012.  I was sitting in the infusion center, IV in, and ready to go.  We waited over an hour for the Herceptin to come down from the pharmacy.  I was about to lose my mind.  I felt like I had already been so through much waiting for the radiologist reports, the oncologist visits, the breast surgeon visits.  I was so impatient in that moment, when Becky grabbed my arm and said, "You are going to have to learn to be patient, because this is the way it is in hospitals.  Things don't always run smoothly."  I take myself back to that conversation often, and am proud to say that I have taught myself to be a patient with a lot of patience. Labs need time.  The pharmacy needs to be accurate. Every patient's questions need to be answered. Emergencies happen. All of which create continuous delays throughout the day within the hospital. It may seem unreasonable and that your time is not important.  It may not seem fair. B
4 comments
Read more

The Mystery of Strength

February 10, 2017
It was 30 months ago that I was diagnosed with Stage 4 Metastatic Breast Cancer. 2 1/2 years.  I cannot even begin to explain to you just how grateful to God that I am here, LIVING, and typing this post. What is strength? What does it look like? What does it feel like?  Can it be measured?  Well, everyone has it but some wonder if some have more of it than others? I think not. Strength is something that everyone has. Strength displays itself in many different ways. Ways that can neither be understood nor explained. Really, it's a mystery. I suppose we store it somewhere within our souls...until we need it. I don't think that anyone necessarily has more than anyone else. I think it is a large spectrum. Some only need to find it every so often, while others must use it to survive. Until I was diagnosed with breast cancer in 2012, I led what I would call, an easy life. I flowed through the motions of life and things always seemed to work out like it should for me.  I always
5 comments
Read more

Wow...two months have flown by since I lasted posted. It's not that I do not have anything to update.  I guess that I am just not really sure what the update is.  Right now, I am in a scary place that no cancer patient really wants to be.  It is a foggy place where I am running away from progression, enduring the brutality of side effects while searching for that next line of treatment that will clear the path for a while.  When my Kadcyla treatments stopped working in July, I switched to Xeloda which was a chemotherapy pill that I did along side Herceptin infusions.  After two rounds, new scans showed  that this line of treatment was not cutting it.  So now treatments #36, #37, #38 and #39 have been a chemotherapy called Doxil. It looks like Hawaiian Punch going into my veins! My understanding is that it damages the DNA of cancer cells that tells them how to divide. I have been okay with dealing with the somewhat manageable side-effects as my last scans showed that all of my c
7 comments
Read more 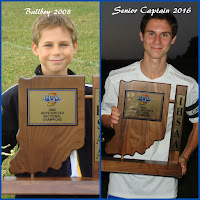 It was 2008, Luke was 10 and Levi was 9.  One of my older nephews was on the high school soccer team.  Luke and Levi loved playing soccer, and they loved being ball-boys for all of the home high school soccer games.  On October 10, 2008, the high school boys won Sectionals. All four of my boys were ecstatic.  I was overwhelmed with joy by watching the team's excitement as they held their trophy in the air, and could only hope for a day that my boys would be able to do the same.  Luke Levi As I took pictures of the my little ball-boys of the winning game, Luke held the trophy in the air and said..."Some day, I am going to hold my own Sectional trophy!" Eight years later, Luke is a senior, Levi a junior and David a freshman. They had the school's best record of 11-2 heading into Sectionals. We weren't too worried about the first game as we had already beat this team in the regular season.  Luke scored 6 goals, winning 8-2.  Sectional finals would be aga
2 comments
Read more
More posts

Lori
I have been married to my amazing husband, Ben for 21years. We have four sons, ages 20, 18, 17 & 15, and one daughter who is 13. Life is pretty crazy busy around here, but I wouldn't have it any other way! I was diagnosed with breast cancer on August 7, 2012 and then again with Stage IV Metastatic Breast Cancer on August 27, 2014...and this is the story of my journey. Please feel free to share it with anyone you feel it might help! :) 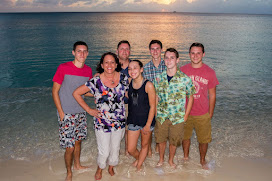